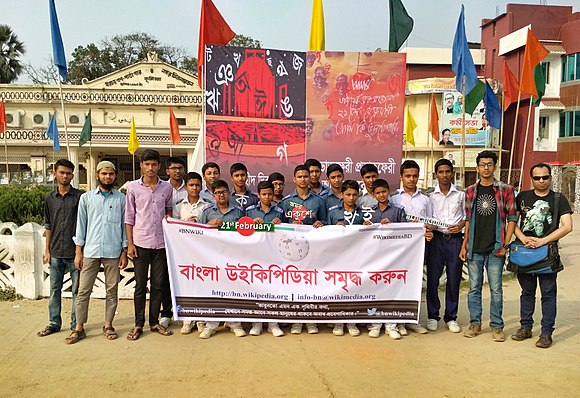 On 21 February 2018, Wikimedia Bangladesh hosted gatherings in 6 cities of Bangladesh (Dhaka, Chittagong, Rajshahi, Khulna, Sylhet and Comilla) to observe International Mother Language Day. Wikipedians of Bangladesh were standing in a public place with banners asking passersby to contribute to the Bangla Wikipedia and other Wikimedia projects. The day has a special meaning to Bangladeshis, as UNESCO established 21 February as International Mother Language Day as a tribute to those who were killed in the 21 February 1952 Bangla Language Movement demonstration and the ethno-linguistic rights of people around the world.

The First gathering was held back in 2007 in Dhaka. Since then, Bangladeshi Wikimedians have been doing it annually. More images can be found on Wikimedia Commons.